Posted on July 22, 2014 by Bonnie Schupp
A look at the American education system and the testing issue: The Death and Life of the Great American School System: How Testing and Choice are Undermining Education, by Diane Ravitch, 2011 by Basic Books, New York. 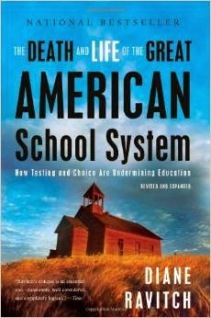 There is an outcry among many people that our educational system needs reform but there is much disagreement about causes and how to fix it. Ravitch’s book takes a good look at this issue and how testing is hurting our students.
I embrace technology but I am afraid that technology has played a large role in the state of the educational system. Actually, it is the ability of technology to generate data that is partially responsible for our problems. Ravitch says that we cannot improve our schools by blind worship of data.
(p. 281) The biggest risk of putting too much faith in tests and their data is in forgetting that test scores are an indicator, not the goal of education. ..It’s good to have data to guide policy, but it is important not to confuse data with evidence.

No Child Left Behind

But this is where we are now. Too many people, those in decision-making positions, are using data to drive education with the idea that schools should run like businesses.  No Child Left Behind has hurt education. The attitude that whatever could not be measured did not count (p. 21) has led to neglect of social studies, science and the arts in our schools. Teachers know very well how different subjects work together to help educate the whole child. They learn math in language arts, social studies, music, art and industrial arts (shop). They practice reading skills in all of these classes too. Students also are exposed to discipline, creativity, focus and the joy of learning—things not assessed on functional standardized tests.
(p. 29) The only vision No Child Left Behind (NCLB) had was improving test scores in reading and math. It produced mountains of data, not educated citizens. Its advocates then treated data as evidence of its success.
For several years before I retired from teaching language arts,  students had to take functional reading and writing tests. It’s not that I object to teaching students how to read and write but that we are only focusing on “functional.” I was already doing that and more until that 4-letter word—test—became a demi-god. From the beginning of the school year, we had to teach the test jargon, give practice tests, assess the practice tests, review, give another practice test, and then repeat it all again. I could see the light go out of my students’ eyes, students who used to like school and had some connection with it. And I could certainly feel my light dim. I became bored teaching for the test.
(p. 229) The overemphasis on test scores to the exclusion of other important goals of education may actually undermine the love of learning and the desire to acquire knowledge, both necessary ingredients of intrinsic motivation.
Principals felt the threat. If their school did not perform well on the tests, then their school might be closed. Teachers would be let go. You see, with the belief that data, test scores, were so important, was the belief that teachers were the key to everything. If their students did not do well, it was the teachers’ fault. Never mind that some students existed in dysfunctional families. Never mind that their parents did not know how to be parents. Never mind that some parents took their kids out of school, in the middle of test preparation, to go to Disney World. Never mind that students were never taught a work ethic and that they were unmotivated. If they did not improve their test scores, it was the fault of the teachers.
(p. 162) …the authors of the law forgot that parents are primarily responsible for their children’s behavior and attitudes. It is families that do or do not ensure that their children attend school regularly, that they are in good health, that they do their homework, and that they are encouraged to read and learn. But in the eyes of the law, the responsibility of the family disappears. Something is wrong with that. Something is fundamentally wrong with an accountability system that disregards the many factors that influence students’ performance on an annual test—including the students’ own efforts—except for what teachers do in the classroom for forty-five minutes or an hour a day.
The test scene gives birth to gaming the system. Teachers spend all their time teaching for tests. Some cheat. Students learn how to become good test takers. States lower the standards so students will look better on the tests. (p. 106)

The business of education?

When comparing American schools with schools in other developed countries, Marc Tucker, National Center on Education and the Economy, says that we are on the wrong track.
(p. 282)  …the education strategies now most popular in the United States are conspicuous by their absence in the countries with the most successful education systems. Charter schools, vouchers, annual grade-by-grade testing with multiple-choice standardized tests, closing schools with low scores, and evaluating teachers according to their students’ scores: All of that, Tucker writes, is irrelevant. What the top nations in the world have done and we have not is recruited the best prospective teachers—not for a few years like Teach for America, but for a full and satisfying career as teachers and administrators. Teachers in these nations are highly respected professionals with competitive compensation, high-quality professional training in elite institutions, and broad professional autonomy in the workplace. Each of these top nations has a broad national curriculum that includes the arts and music, social sciences, and other subjects. Teachers master the expectations of the national curriculum (it does not tell teachers how to teach, but describes in general terms what will be taught).
No other country tests students every year as we do in grades 3-8 or assesses their teachers by their students’ test scores. We lead all other countries in the number of changes we have mandated in education over the past decade.

We are turning out trained test takers rather than educated human beings and, although students might ultimately obtain higher test scores, they may be receiving a worse education.
~~~~~~~~~~~~~~~~~~~